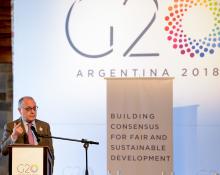 "No single country or region can succeed in isolation. In this interconnected world, if things do not work out for all, they do not work out for anyone. Thus, policies both at the international level and the national level have to be more coordinated than ever," Foreign Minister Jorge Faurie stated today in the city of Bariloche as he opened the first meeting of the G20 Sherpa track under the Argentine G20 Presidency.

Joined by the Argentine Sherpa, Pedro Villagra Delgado, Faurie affirmed: "Argentina will be true to its history, traditions and geographical location, all of which make up our DNA. We bring in a perspective from the south, from our region, from where we come from."

"Argentina is proud to be a member of the G20 since the G20 was created in 1999. It is our honour to have been elected to preside over it until December 2018. We will respond with a strong commitment to keep shaping this group as the main coordination mechanism for achieving stability and governance in finance and macroeconomics, as well as in social and political issues," Faurie stated.

The Foreign Minister explained to the group of Sherpas that the Argentine Presidency's priorities will include "the future of work, linked to education to develop skills and enable people to benefit from new technologies." Furthermore, priorities will include investment in "infrastructure for development, which boosts growth and productivity," and, lastly, "fostering food production in global value chains, so as to achieve food security all over the world."

The Argentine Foreign Minister also underscored that "G20 countries have played a key role in developing rules that apply to the international community. This is a feature that strengthens the Group: its real ability to identify and accept principles and guidelines." The Minister highlighted the Group's effectiveness, along with multilateralism, "when we faced the global financial crisis in 2008, cooperation prevailed and the system did not collapse."

Faurie then pointed out that Argentina has chosen the following slogan for its Presidency: "Building Consensus for Fair and Sustainable Development" and stated:  "We are building on the work done by Germany, China and the countries that previously held the Presidency, and we know that Japan (2019) and others will follow the same path."

He also underscored that "Consensus is not just a formal requirement. It means commitment, equality and partnership. This will be the spirit underlying all of our proposals, goals and commitments," adding: "But how can consensus last without equity? This is a pressing demand of our peoples and it is our duty. We must believe that fair agreements can be reached."

Finally, the Argentine Foreign Minister explained that the idea of "sustainability is the framework within which we will achieve economic, social and environmental goals. It is our responsibility towards future generations."