Faurie in Brazil: "We are designing the MERCOSUR of the 21st century" 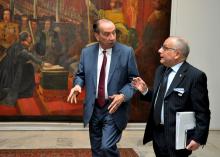 Today, Foreign Minister Jorge Faurie participated in the Ordinary Meeting of the Common Market Council held in Brasilia, where he mentioned the need to "continue designing the MERCOSUR of the 21st century", on the day before the Summit of Heads of State and Associate Members of the South American bloc.

In his address, Minister Faurie called on his MERCOSUR counterparts to work on "regulatory harmonization" between member states, "with a view to developing regional public policies".

In addition, he highlighted the goal of "moving forward with the removal of intra-Mercosur trade barriers" and of "designing a scheme to promote productive integration and to avoid the distortions affecting the relative competitiveness of Member States".

In the presence of the Foreign Ministers of the bloc, the Argentine Foreign Minister underscored "the cohesion among the four member states at all stages of the negotiation" with the European Union (EU). "We have yet to reach a final agreement, but no one can say that we are not putting in effort in the negotiations, taking on challenges and defending the interests of our region," he emphasized.

Minister Faurie also reaffirmed the interest in initiating negotiations towards reaching trade agreements with Canada and Korea, as well as in moving forward with ongoing negotiations with countries from EFTA and northern Africa.

Tomorrow, Paraguay will take over the Presidency Pro Tempore of Mercosur, held by Brazil since last July, when the Presidential Summit was held in Mendoza. "We will work hand in hand with Paraguay in order to ensure that progress can continue fruitfully," Minister Faurie added.

The Argentine Foreign Minister also explained that "in this semester we have managed to create the group on e-commerce and digital matters. This shows the level of attention and monitoring of our bloc as regards current issues on the social and economic agendas of our countries, given that digital matters have acquired an important dimension and exert a considerable influence on the workplace."

At the meeting, Minister Faurie was joined by the Secretary for International Economic Relations, Horacio Reyser; the Argentine Ambassador to Brazil, Carlos Magariños, and the Secretary for Economic Policy of the Ministry of Finance, Sebastián Galiani.